The store will not work correctly in the case when cookies are disabled.

“Having the option to incorporate some of the student’s favourite songs into the activities has increased engagement and motivated the whole class to focus on activities for longer periods of time.”

Swiss Cottage is an SEN school that focuses on holistic development through a flexible curriculum, which emphasises ‘Deep Learning’ by responding to each student’s learning point.

Gurdeep used Cosmo to engage students in solo P.E. activities to increase the length of time students stay engaged in an activity that involves a lot of movement. He also used it as a transitional aid to help students move between areas of the school.

How was Cosmo used?

The class teacher wanted to find a way to get her students to move more in P.E. lessons, so we worked with each student individually in the P.E hall, first uploading their favourite songs into the Cosmo app (which was really easy). We then placed the Cosmoids around the hall and started the Turn-Taking activity. When a cosmoid lit up, we encouraged the student to press it, resulting in them hearing part of their favourite song. Then the song would stop, and another Cosmoid would light up. If they wanted to listen to the next part, they had to move to press the next cosmoid.

We also used Cosmo as a transitional aid for a student who found it challenging to move between parts of the school. He loved the Cosmoids, so we placed them along the school corridor, encouraging him to collect them as he moved through the school.

How did students respond?

The students loved triggering their favourite songs, and once they had figured out the concept, they started moving between each Cosmoid really quickly. Thanks to Cosmo, one student who rarely runs at all spent over 15 minutes running around the P.E. hall. 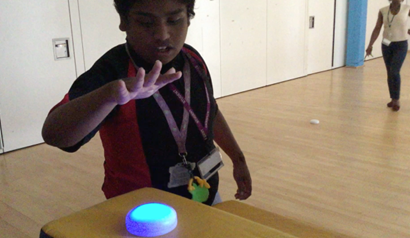 What skills did it develop?

This activity allowed us to focus on many fundamental skills, including independent movement, increased motivation, problem-solving, following instructions, and initiation of activities. It seems we really only scratched the surface, and I feel Cosmo could be used in so many other parts of the school day.

How did staff respond?

All the staff who were present were really impressed with how motivated and engaged students were by Cosmo. The combination of light, sound and touch was very enticing for them, and the fact that they enjoyed the activity meant that they were exercising without even realising it.